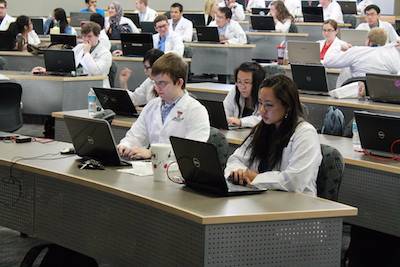 The admittance of a founding class of 64 members was admitted in August 1996 ended a three-decade effort to plan, secure legislative authorization, and find funding to establish the Texas Tech University Health Sciences Center School of Pharmacy.

Programmatic funding has always been difficult to secure, but the Legislature appropriated funds to construct a 1 million sq. ft. health sciences building in Lubbock. The building was designed with three "pods," and the first pod was to house the School of Medicine while the second was constructed for the Schools of Health Professions and Nursing; and the third pod was to house the School of Pharmacy. A shortfall in funding caused the University to leave pod 3 unfinished, anticipating the approval of a pharmacy program to be forth coming.

Officially, the University was authorized to offer the B.S. in Pharmacy - the entry-level professional degree for licensure in Texas. After years of continued discussion of the growing need for a West Texas pharmacy school, the Texas Legislature authorized funds in 1991 to conduct a study of the need for and feasibility of starting a pharmacy school on the Lubbock campus. The consultants documented a great need for a pharmacy program and proposed a plan to establish the program in Lubbock. By that time, other HSC programs had occupied much of the third pod that was initially constructed for the pharmacy school, so the plan included additional facilities to house the new program.

About this time, community leaders in Amarillo began thinking creatively about how to expand the community's rather small TTUHSC campus located in the Harrington Regional Medical Center. Essentially, Amarillo received a small number of third- and fourth-year medical students from Lubbock for their clerkship training, and the local hospitals offered limited residency programs in Family Medicine, Internal Medicine, Pediatrics, and OB/GYN.

Plans were being made to offer satellite Physical Therapy and Occupational Therapy programs, utilizing distance education technology between Odessa, Lubbock and Amarillo and funded in large measure by the communities' hospitals. Amarillo community leaders, knowing of the University's and region's need for a pharmacy program and limited state resources to provide construction of adequate facilities, began thinking how they could fund a pharmacy building in Amarillo to influence the University and Legislature to make Amarillo the base of operations. 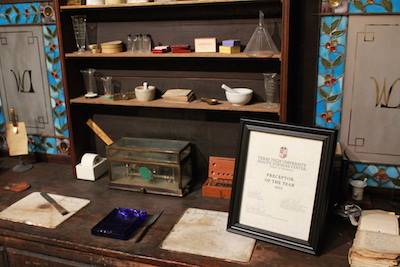 Primary among these leaders were Jerry Hodge, B.S. Pharmacy, R.Ph., a local pharmacist/entrepreneur who had previously served as mayor; Selden Hale, J.D., a local attorney who was in a family of pharmacists, including his brother Tom Hale, Ph.D., a pharmacist/pharmacologist and faculty member of the School of Medicine in Amarillo. Together, these leaders begin considering alternative strategies to realize their goal.

Jerry and Selden were, at that time, commissioners for the Texas Department of Criminal Justice (TDCJ). The TDCJ was planning the location of a Prison Psychiatric Hospital in West Texas with several West Texas communities vying to secure the new facility for their communities. John T. Montford, J.D., the Texas State Senator for Lubbock and surrounding counties chaired the Senate Appropriations Committee, a position that carried significant influence to move new programs through the Legislative process. Selden's wife had professional ties to Lieutenant Governor Bob Bullock, the most powerful politician in the State and a graduate of Texas Tech University. The Speaker of the House of Representatives was Pete Laney from Plainview. With all these state leaders in-place, the opportunity to secure the pharmacy school for West Texas, planned since the early 1970's, was in position to become a possibility.

The Amarillo community leaders took advantage of the difficulty the University and region were having securing the funding for a pharmacy building. Acting in their role as TDCJ officials, they offered to support to Senator Montford's plan to locate the TDCJ Psychiatric Hospital for West Texas in Lubbock in return for the Senator supporting the funding of a new pharmacy school for TTUHSC headquartered in Amarillo. The deal was struck on a private plane carrying the three men from Amarillo to Lubbock.The opportunity for a new pharmacy school for TTUHSC based in Amarillo rather than Lubbock had a real chance of become a reality.

During the 1993 Texas Legislative session, the appropriations committee approved the concept of the TDCJ Psychiatric Hospital for Lubbock and the Pharmacy School for TTUHSC in Amarillo, but an appropriations' rider was placed in the bill: No state dollars could be spent to construct the Pharmacy Building; the state would only pay start-up costs to secure accreditation and hire the faculty if the Amarillo community would build the building and donate it to TTUHSC.

Many people thought this would kill the chances for the School to be based in Amarillo. But to the Amarillo community leaders, this was just one more challenge to overcome to realize their goal.

By this time, the Amarillo community partners grew to include Senator Teel Bivins, Amarillo Councilman John McKissack, and Amarillo Mayor Kel Seliger. As the leaders begin looking for funding sources, four additional community leaders joined the effort: Bill Gilliland, Don Powell, Wayne Sturdivant, and Garet von Netzer. The community leaders identified four potential funding sources for the goal of $13M. The leadership was taken by the Amarillo Economic Development Corporation that quickly understood that this project would generate a long-term source of funding for economic development for the community: new faculty jobs; new students moving to Amarillo -- many with their families -- and job creation for local staff members. The new jobs would increase the demand for housing, purchases in the community, and opportunities for spousal employment.

The second major entity was the Amarillo Hospital District's Northwest Texas Health Care System. Northwest was, at the time, a city of Amarillo owned health system and having pharmacy and future development of health professions programs it would bring was identified as a foundational program to help the community meet its growing health manpower needs.

The third source of development funding was the Harrington Medical Center, Inc. which provided land within the Medical Center to construct the new campus. The land on Coulter Street was selected for the new Pharmacy Building and was donated to its development.

The fourth important funding source was the community in the Panhandle, including foundations, corporations and private gifts. The success in raising $3M from the community is noted within the pharmacy building by viewing the donor plaques on the many rooms, testament to the significant community support given the development of the new School.

With the pledge of construction and a utility endowment secured, the 1993 Texas Legislature appropriated sufficient funds to hire a 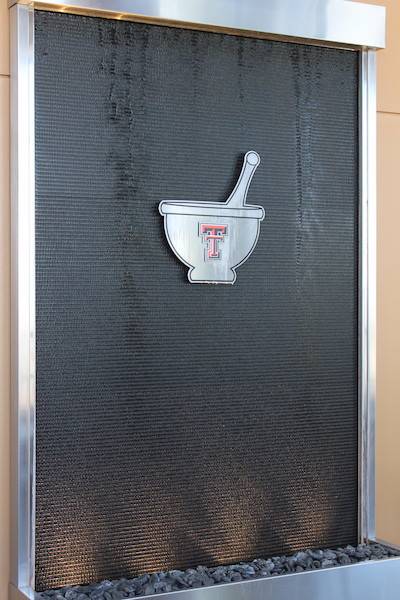 dean, file an application for accreditation with the American Council for Pharmaceutical Education (the name of the accrediting body at that time), and with the Texas Higher Education Coordinating Board (THECB) that gave TTUHSC the authority to offer the Pharm.D. degree. The program was authorized for Amarillo as part of TTUHSC.

The University hired a consultant to assist in recruiting the Founding Dean and begin planning the program and the new building. Jack Cole, R.Ph., Ph.D., emeritus dean of the College of Pharmacy and Provost of the University of Arizona was retained. Arthur A. Nelson, Jr., R.Ph., Ph.D., Dean of the College of Pharmacy, Idaho State University was selected by TTUHSC from among three finalists who were deans at other accredited pharmacy schools. Dean Nelson accepted the appointment in May of 1994, and began working with W.D. Architects of Amarillo to design the building. He began his administration on August 15, 1994, and developed the ACPE and THECB applications to secure approval to begin the program.

During 1995, Dean Nelson was also appointed as Director of Pharmacy Services at Northwest Texas Health System to facilitate the development of an integrated pharmacy practice/pharmacy educational program and bring changes in the Systems pharmacies to promote greater involvement of the pharmacists in direct patient care responsibilities. This dual position lasted only one year when the City sold the Health System to a private hospital management corporation that had a system-wide contract for pharmacy services.