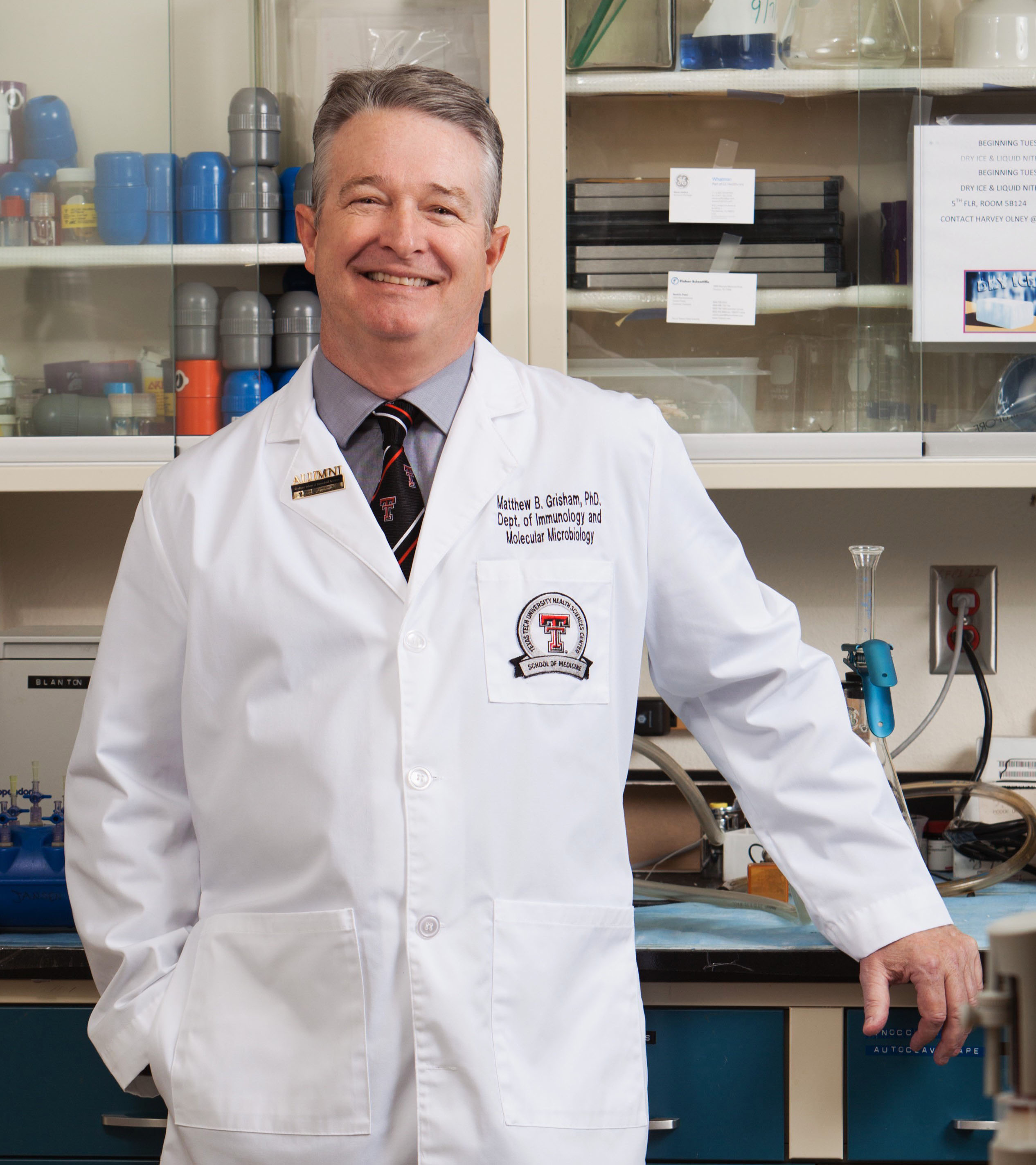 Matthew B. Grisham is Professor and Chair of the Department of Immunology and Molecular Microbiology and the Vernon and Elizabeth Haggerton Chair in Gastroenterology at Texas Tech University Health Sciences Center (TTUHSC). Dr. Grisham received his PhD in Biochemistry from TTUHSC in 1982. Following graduation, Dr. Grisham moved to St. Jude Children’s Research Hospital to pursue postdoctoral training in immunology and inflammation. In 1984, he was recruited to the University of South Alabama College of Medicine in Mobile where he assumed the position of Assistant Professor in the Department of Biochemistry. Three years later, he was recruited to the Department of Molecular and Cellular Physiology at LSU Health Sciences Center (LSUHSC) where he rose through the ranks achieving the position of Professor and Associate Director of the Center of Excellence for Arthritis and Rheumatology. In 2004, Dr. Grisham was awarded the Boyd Professorship by the LSU System. The Boyd Professorship is the highest academic rank that can be bestowed upon a faculty member within the Louisiana State University System. Following his 25 year tenure at LSUHSC, Dr. Grisham was recruited to TTUHSC in 2012 where he assumed his current position.  Dr. Grisham’s research has focused on defining the molecular, cellular and immunological mechanisms responsible for the chronic inflammatory tissue injury observed in animal models of the inflammatory bowel diseases (e.g. Crohn’s disease and ulcerative colitis). More recently, his laboratory has begun to explore the role of different T cell subsets in the immuno-pathogenesis of acute graft versus host disease.

His research has been continuously funded for the past 28 years by research awards from the National Institutes of Health (NIH) and more recently by the Department of Defense. In addition to his federal funding, Dr. Grisham has received research grants from several different funding agencies and foundations as well as biotechnology and pharmaceutical companies. He has published 294 articles in peer-reviewed journals, 75 book chapters, edited two books and written one book.  Dr. Grisham has received numerous honors and awards during his career including the Distinguished Alumni Award from TTUHSC, the Dean’s Scholarship/Research Award from TTUHSC, the President’s Excellence in Research Award from TTUHSC, the Vernon and Elizabeth Haggerton Chair in Gastroenterology at TTUHSC and the Boyd Professorship. Dr. Grisham has also held numerous national and international leadership positions during his career including his service as the President of the Society for Free Radical Biology and Medicine, President of the Gulf Coast Physiological Society, Chair of the Gastrointestinal and Liver Section of the American Physiological Society (APS), Chair of the Gordon Conference on Oxygen Radicals, Co-Chair of the APS-sponsored Symposium on Experimental and Clinical Inflammatory Bowel Disease and Co-Chair of the Basic Research Single Topic Conference for the American Association for the Study of Liver Diseases.