The History of Pharmacy

The History of Pharmacy

The world’s oldest known prescriptions were recorded on a clay tablet in Mesopotamia (modern-day Iraq), ca. 2400 BC. This Sumerian cuneiform document describes methods for making poultices, salves and washes. The ingredients, including mustard, fig, myrrh, bat droppings, turtle shell powder, river silt, snakeskins and “hair from the stomach of a cow,” were dissolved into wine, beer or milk.

The earliest known record of a compounded medicine is found in the Sushrata Samhita, a classical Sanskrit text on surgery and one of three foundational texts of Ayurveda – or Indian traditional medicine – that dates as early as the 6th century BC.

However, the origins of pharmacy as a means of curing human ailments and alleviating human suffering is almost as old as humanity itself. From the earliest days of mankind, we have taken notes from the natural world around us to make use of plants as healing agents – creating the first medicines in the infant stages of what would become pharmacy.

By the early 17th century, Western society had created its first pharmacist guild, and those apothecaries played a central role as healthcare providers. Two centuries later in the United States, apothecaries became known as pharmacists, thanks to Edward Parrish of the American Pharmaceutical Association, as it was then known. Within those bounds, pharmacists made and prescribed medicines into the 1950s as respected community medical providers.

Passage of the 1951 Durham-Humphrey Amendment to the Federal Food, Drug and Cosmetic Act of 1938 altered the role of the pharmacist. Now restricted to recommending over-the-counter medications, they began to focus more on dispensing prescriptions and ensuring product safety. A movement began during the 1980s to expand the role of pharmacists in the clinical setting, and by 2003, with the Medicare Prescription Drug Improvement and Modernization Act, pharmacists were given greater opportunities to again counsel patients on both over-the-counter and prescription medications.

The role of the pharmacist continues to expand as patient assessment becomes an increasingly important function – ensuring that the patient-centered care that roots our history also directs our future.

The History of Pharmacy in Texas 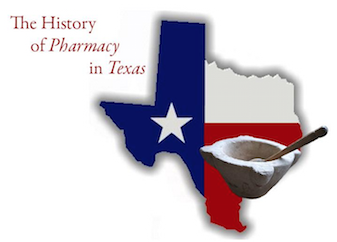 It is thought that Spanish explorer Álvar Núñez Cabeza de Vaca was one of the first Europeans to practice pharmacy and medicine in North America. When his party landed on the coast of Texas, the Native Americans who greeted them soon enslaved him and forced him to treat victims of the epidemic diseases that accompanied the explorers. To do so, Cabeza de Vaca mixed his own European knowledge with Native American medicine, herbs, concoctions and magic.

By 1682, Spanish missionaries in El Paso were filling the pharmacy role, dispensing medicine to the sick because physicians only visited civil communities and military posts. Even then, Spanish physicians in Texas lacked drug supplies and knowledge, so they augmented their skills, knowledge and supplies with assistance from Native American medicine men.

Physicians on the Spanish and American frontiers often treated patients with medicines prepared at the patient’s bedside with herbs from their saddlebags according to traditional recipes that were particularly adaptable. In time, some of these physicians made up large batches of their medicines to keep on the shelves of their offices or homes, which they called “drug stores.” This practice forms the origins of drug manufacturing and sale in Texas.

The practice of combining drugstores with medical practice was not uncommon, and several early 19th century Texas physicians provided medicines in addition to medical care. According to The Handbook of Texas, published by the Texas State Historical Association, the first documented drugstores not operated by physicians were located in Austin; one was owned by McKinstry and Hyde and another by Robertson and Benjamin P. Johnson. Later, Cayton Erhard emigrated from Germany and opened a drugstore in San Marcos, and the Behrmann Drug Store is believed to have been the first to open in Galveston, where Justus J. Schott apprenticed for his pharmaceutical training.

By the mid-nineteenth century, Texas druggists bought basic substances in bulk and acted as manufacturers, wholesalers, retailers and prescribers. It was first Behrmann’s and then Schott’s pharmacies that provided the primary source of medical supplies from Europe to other drugstores and physicians in Galveston and the rest of the state. Then, in 1854, Frederick J. Kalteyer opened a retail drugstore in San Antonio and imported drugs from France and Mexico. He developed a large wholesale drug business that became the San Antonio Drug Company, which operated for more than a century.

The UT School of Pharmacy was created that same year and registered 11 students, with James Kennedy, a San Antonio physician, appointed the first Professor of Pharmacy. The course of instruction consisted of two sessions of seven months. The school moved to Austin in 1927 and became the College of Pharmacy. Graduate work was offered for the first time in 1948.

The first law regulating the practice of pharmacy in Texas was passed in 1889, establishing pharmaceutical examination and certification committees in each state senatorial district.  A lack of consistency in standards and poor coordination and record-keeping throughout the state led to a 1907 bill that established the first State Board of Pharmacy. The Texas Health Law, which helped control access to drugs, was passed the same year. The current Texas Pharmacy Law was passed in 1929.

The History of TTUHSC School of Pharmacy

None of the other early Texas pharmacy schools survived, but new schools came along to take their place. The Texas Legislature authorized Texas Tech University Health Sciences Center School of Pharmacy (TTUHSC-SOP) in 1993. It was the first publicly-supported pharmacy program established in the United States in nearly five decades, and the legislation specified that it be located in Amarillo. Legislators also mandated that no state funds could be used for the initial construction, so the Amarillo Economic Development Corporation, the Harrington Regional Medical Center and many private donors contributed generously to the $13 million needed to build the 102,000-square-foot building. Construction began in March of 1995 and the founding class of 65 students began their coursework in August of 1996.

The TTUHSC-SOP Lubbock Regional Campus opened in January 1998. The campus is located in the main TTUHSC building in Lubbock and assigns students to clinical sites in Lubbock and the surrounding region. In 1999 TTUHSC-SOP officially opened its Dallas-Fort Worth Regional Campus, using facilities leased from Baylor University Medical Center, and in 2002 the campus was relocated to the grounds of the North Texas Veterans Affairs Hospital in Dallas. In August 2008 TTUHSC expanded its DFW program to a second location inside the Southwest Professional Building adjacent to the University of Texas Southwest Medical Center.

The concept for expanding the TTUHSC pharmacy program into Abilene first came about in 2004, when a group of community and private organizations approached the SOP with a vision to offer four-year pharmacy education and research to their community and region.
The Texas Higher Education Coordinating Board approved the expansion in January 2006, and the school began making plans for extending its Pharm.D. and Post-Graduate Pharmacy Education programs into the Texas Big Country. A 40,000-square-foot campus was constructed, and classes began in August of 2007.

The Abilene Regional Campus supports all four years of the SOP's Pharm.D. program. It enrolls 40 new students each academic year, increasing the SOP's total class size from 90 students to 130.