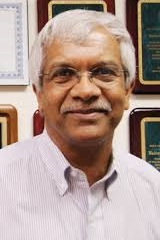 Cancer biology; development of novel anticancer drugs; interaction between gut microbiome and the host; structure and function of the retina in health and disease.

Cancer biology and development of novel anticancer drugs.
Tumor cells grow faster than normal cells and therefore have an increased demand for nutrients. This increased demand is met with via upregulation of selective transporters in the plasma membrane. Such nutrient transporters that are selectively upregulated in cancer represent novel drug targets because blockade of these transporters would lead to starvation in tumor cells, thus interfering with their growth and proliferation. We are particularly focusing on the transporters for amino acids because most cancers are “addicted” to the amino acid glutamine. The current focus is on the amino acid transporter SLC6A14 that is upregulated in colon cancer, pancreatic cancer, cervical cancer, and some subtypes of breast cancer. We have identified small molecules that block this transporter and show efficacy in cancer treatment in pre-clinical animal models, strongly suggesting the therapeutic potential of this transporter as a target for development of a novel class of anticancer drugs.

Hemochromatosis is a widely prevalent genetic disease of excessive iron accumulation. Most people have not heard about this disease even though it occurs in 1 in 250 people in this country. Patients born with this disease lead a normal life almost for 50-60 years after which almost every organ in the body starts failing due to the damage caused by excessive iron accumulation. Our research has now indicated that this disease is a driver of cancer growth and metastasis in colon, lung, and prostate. Delineation of the molecular events that underlie the promotion of cancer growth and metastasis by excessive iron in this disease is one of the focuses in our laboratory.

Interaction between gut microbiome and the host and its relevance to colon health.
Our intestinal tract, particularly the colon, is the home for trillions of bacteria. These are not pathogenic but actually beneficial to the host. These bacteria feed on dietary fiber and generate a variety of metabolites that are believed to mediate the beneficial effects of the bacteria and fiber on the host. One important class of these bacterial metabolites is short-chain fatty acids, which include acetate, propionate, and butyrate. Our laboratory has identified a transporter for these metabolites in colonic epithelial cells (SLC5A8) that is obligatory for the beneficial effects of these metabolites. Deletion of this transporter in mice increases inflammation and carcinogenesis in colon under various experimental conditions. We also have identified two G-protein-coupled receptors, GPR109A for butyrate and GPR43 for acetate, propionate and butyrate, that are expressed in the colonic epithelium and mucosal immune cells. Deletion of either of these two receptors in mice increases the risk of colonic inflammation and colon cancer. While the transporter SLC5A8 is necessary for the entry and intracellular actions of short-chain fatty acids in the colon cells, the receptors GPR109A and GPR43 are necessary for the extracellular actions of these bacterial metabolites. Interrogation of these three proteins in terms of their role in the communication between gut microbiome and the host and also the relevance of dietary fiber in the process is an active project ongoing in the laboratory.