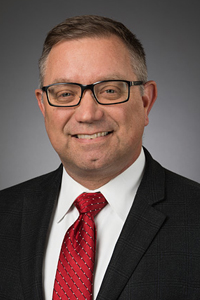 Director of Institute of Anatomical Sciences

Dr. Gilbert was born and raised in Austin, Texas. He attended The University of Texas and graduated in 1993 with a Bachelor of Science Degree in Kinesiology. In 1994 he moved to Lubbock, Texas to attend Texas Tech University Health Sciences Center (TTUHSC) to pursue his Master in Physical Therapy (MPT) Degree. After receiving his MPT degree (1997) and being licensed as a physical therapist, he worked in an outpatient orthopaedic setting at University Medical Center in Lubbock, Texas. He took an Assistant Professor faculty position in the TTUHSC, School of Health Professions (SHP), MPT Program in 1999. Since that time, he has completed his Certification in Orthopaedic Manual Therapy (COMT) through the International Academy of Orthopaedic Medicine-United States (IAOM-US; 2000), and completed his Doctor of Science (ScD) degree through TTUHSC in 2004. Dr. Gilbert has served as the TTUHSC MPT/DPT Program Director since 2004 and also has faculty appointments within the Transitional DPT, ScD, and PhD Programs within the Department of Rehabilitation Sciences. Dr. Gilbert was promoted to Associate Professor and was granted Tenure in 2009. In 2016 Dr. Gilbert was promoted to Professor. Dr. Gilbert coordinated the Musculoskeletal PT Practice track of the TTUHSC DPT curriculum for 10 years and now coordinates the Human (Gross) Anatomy course for the School of Health Professions. He also serves as the Assistant Dean of Anatomy Research and Education for the School of Health Professions and the Director of the Clinical Anatomy Research Lab within the Center for Rehabilitation Research. Dr. Gilbert was awarded the “Young Investigator Award” (2007) by SPINE and was co-author of the SPINE “Young Investigator Award” manuscript (2015) for his work in nerve root displacement and strain in unembalmed cadavers. He is also known for his work in intraneural fluid dynamics in response to neurodynamic mobilization. Dr. Gilbert serves as the TTUHSC representative to the State Anatomical Board of Texas. As Co-Director of the Institute of Anatomical Sciences, Dr. Gilbert is committed to excellence in anatomical teaching, research, and service, and is excited to build an interdisciplinary approach to anatomical education and investigation.