Export control laws are federal regulations that govern how certain information, technologies, and commodities can be transmitted overseas to anyone (including U.S. citizens), or to foreign nationals on U.S. soil.  TTUHSC and its employees are required to comply with applicable export control laws and regulations.

This site will provide information about export control regulations and how they affect research at TTUHSC - such as international travel, foreign nationals on research projects, and shipping or taking items (laptops and software) outside the U.S.

The following article is regarding Export Controls and a faculty member at the University of Tennessee - click here.

Any questions regarding export control at TTUHSC can be addressed to Chadley Copeland, Research Compliance Officer at 806-743-4752.

Export control regulations prohibit the unlicensed export of certain commodities or information for reasons of national security or protections of trade.  Export controls usually arise for one or more of the following reasons:

An export is any oral, written, electronic or visual disclosure, shipment, transfer or transmission of commodities, technology, information, technical data, assistance or software codes to:

A "Foreign National" is any person who is NOT a:

Exports may be controlled due to any of the following factors:

Exports can be disclosed via the following actions:

The FBI has produced a good source for faculty members who travel to conferences in countries outside the US.  It includes specific information regarding how to protect the information in your phone and computer and advises the traveler that in some countries their movements may be monitored.

This is the PRIMARY export control issue facing university research.

Who it Affects
Foreign Nationals are subject to deemed export requirements unless:

Why it is Important
According to recent reports, the Commerce Department has begun to monitor applications for employment based visas, and particularly H visas, more closely.

The Department's Bureau of Industry and Security has conducted sporadic spot checks of foreign nationals who have been granted H visas to work in sensitive industries, including interviews with their employers.

The FBI also has become increasingly concerned with the relationship between foreign workers and the release of technology deemed to be an export under the EAR and ITAR.  As part of their investigative activities, FBI agents have visited universities in order to learn more about projects on which particular foreign nationals have been working, and to ascertain whether or not they are licensed.

Participate In A Clinical Trial 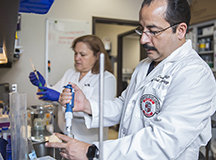 Researchers at the Texas Tech University Health Sciences Center (TTUHSC) Department of Cell Physiology and Molecular Biophysics and the Center for Membrane Protein. Research have determined the kinetic cycle of a potassium channel at atomic resolution. MORE